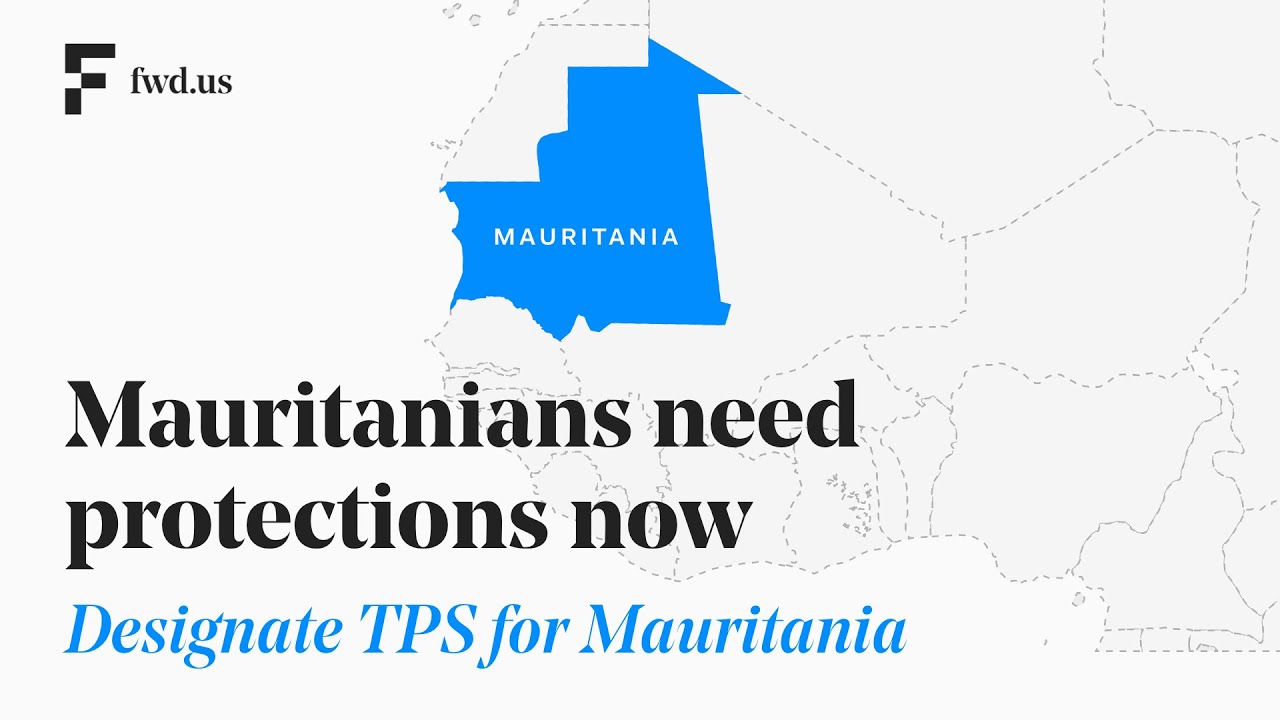 Black Mauritanians living in the U.S. face horrifying violence, enslavement, and even death if they are deported and forced to return to Mauritania. Only urgent action from the Biden Administration and Congress can keep thousands of individuals and families safe. Black Mauritanians suffer widespread race- and ethnicity-based human rights abuses, state-sponsored violence, land grabbing, repression of free speech, forced statelessness, and slavery, making deporting Black people to Mauritania dangerous—and potentialy deadly. Tragically, these conditions are largely the symptoms of a deeply-entrenched caste system that can best be described as an apartheid state.

Many Black Mauritanians were stripped of their citizenship due to their race and ethnicity and are now stateless, which restricts their ability to travel within Mauritania and also makes them perennially vulnerable to arrest. When deported to Mauritania, these indivdiuals are not welcomed as citizens but instead face state-sanctioned violence, the inability to work, and potentially slavery. Black Mauritanians who are not stateless are still subject to arrest, detention, enslavement, the denial of rights, and numerous other abuses.

The Biden Administration and Congress have the ability to protect these individuals beginning with granting a designation of Temporary Protected Status (TPS) or Deferred Enforced Departure (DED), offering Black Mauritanians humanitarian parole, and providing them a pathway to permanent legal status through legislation. TPS, DED, and humanitarian parole represent critical administrative policy options that provide individuals who are already living in the United States the opportunity to remain in the country and work legally, free from the fear of being deported.

The Case for TPS for Mauritania

A country may be designated for TPS if extraordinary conditions in that country make returning to it unsafe, or alternatively if the “country is unable to handle the return of its nationals adequately.” Mauritania clearly meets both of these criteria. Firstly, safe return to Mauritania is impossible for Black Mauritanians due to the country’s racist caste system and state-sponsored violence targeting them.

Second, the Mauritanian government continues to dispute the citizenship of tens of thousands of its Black citizens, limiting their ability to work and travel around the country by denying them access to identity documents and passports. While previous U.S. Administrations had largely paused deportations to Mauritania due to the horrific conditions in the country and the inability of Black Mauritanians to obtain identity documents, the Trump Administration employed the threat of visa sanctions to compel the Mauritanian government to accept deportations.

In response to then-President Trump’s threats, the Mauritanian government issued one-time, temporary travel documents to facilitate deportations of people who had fled the country as refugees and lived abroad for decades. After being deported to Mauritania, however, the government refused to recognize the citizenship of Black Mauritanians, resulting in their indiscriminate jailing and exploitation. Ultimately, these individuals remain undocumented in their country, and many choose to flee to neighbori​​ng nations to escape persecution. Clearly, the Mauritanian government has not adequately handled the return of these citizens.

Members of Congress from both houses have repeatedly pressed for the U.S. government to extend protections to Black Mauritanians. In fact, during her time in the Senate, then-Senator (now Vice President) Kamala Harris led her colleagues in a letter urging the Trump Administration to halt deportations of Mauritanian nationals. Both the Biden Administration and Congress must act quickly to provide life-saving relief for Black Mauritanians in the U.S.

Black Mauritanians have suffered years of persecution, forced flight from their homes, and uncertainty. Like all people, they deserve to live in safety. What’s more, providing them with protections would positively impact the broader community of Black Mauritanians living in the U.S., as well as the U.S. economy as a whole. The Biden Administration has announced TPS designations for other countries engulfed in crises, such as Cameroon, Afghanistan, and Ukraine. It must not leave Mauritania behind.

"Under the Trump Administration, the Department of Homeland Security (DHS) has abruptly abandoned its 20-year-long practice of simply monitoring most Mauritanians eligible for removal and begun actively deporting them. It is unconscionable for the United States to deport these individuals back to Mauritania, where they will likely be denied basic human rights and possibly persecuted and enslaved.”

“Approximately 50 per cent of the Haratine community [live] in conditions of de facto slavery through domestic servitude and bonded or forced labo[u]r.”

2014 Report of the Special Rapporteur on contemporary forms of racism, racial discrimination, xenophobia and related intolerance, Mission to Mauritania.

Mauritania did not abolish slavery until 1981, and only criminalized the practice in 2007, when the government passed a law allowing slaveholders to be prosecuted. Even with the creation of special courts and increased penalties in 2015, poor enforcement of the law has allowed slavery to continue with impunity. The U.S. Department of State’s 2021 country report on human rights outlined how Mauritanian courts routinely dismissed or acquitted the few cases brought against enslavers.

Slavery lies at the center of the racist and caste-based system that continues to marginalize Black Mauritanians today. In the ninth century, Arab-Berbers began enslaving Black people and forced them to assimilate to Arabic langauge and culture, in a system of chattel slavery that is still practiced today. Together, the Haratine community (individuals who are currently or formerly enslaved) and other Black Mauritanians (including members of the Fulani, Wolof, Soninke, and other ethnic groups) make up the majority of the country, yet they are marginalized in its economic and political spheres.

Modern slavery in Mauritania is matrilineally inherited, which means children born to mothers who are enslaved are also considered property by the people who enslave them. Black Mauritanians who are enslaved are not only forced to work without pay, but are subjected to routine sexual assault, including rape, family separation, and even murder.

Mauritania consistently ranks among the “top 10” countries in the world when it comes to the prevalance of slavery, as rated in the Global Survey Index (GSI), with one of the poorest governnmental responses. In fact, the GSI’s rating of the Mauritanian government’s actions to combat slavery actually decreased in recent years, and 62% of the entire population is vulnerable to slave-like conditions, including much of the brutality described above.

A United Nations report on Mauritania found that “approximately 50 per cent of the Haratine community [live] in conditions of de facto slavery through domestic servitude and bonded or forced labo[u]r.” Even in instances where people who are enslaved are freed, they continue to be dependent on their former enslavers due to widespread discrimination against Black Mauritanians and their lack of access to any basic resources, education, or opportunities for work.

Moreover, the Mauritanian government systematically confiscates Black Mauritanians’ land, forcing them to work for or even be enslaved by the new owners of the land. This process has been exacerbated by the government’s contracting with foreign corporations which exploit the country’s natural resources. As a result, the state and international companies are robbing rural families of their access to land and water, without any resulting benefit to them. Inadequate legal protections mean families are stripped of their livelihoods and their villages are decimated.

Mauritania’s historical power imbalances came to a head in the late 1980s, when the government engaged in large-scale, state-sanctioned ethnic cleansing to reduce the number of Black Mauritanians in the country. Black Mauritanians were subjected to physical violence and land grabbing as part of a broader campaign to force them out of the country. Additionally, many were stripped of their identifying documents and deported from their own nation, rendering them and their children stateless.

Subsequently, a 2011 national census nullified the nationalities of all Mauritanians who were not present in the country. It also required those who remained in the country to present official documents of generations of deceased family members in order to prove their citizenship. For the Haratine people and other Black Mauritanians, blatant discrimination and the burden of obtaining generations of identity documents proved insurmountable, as many births and deaths could not be formally registered by their ancestors. This led to huge swaths of the Black population in Mauritania becoming undocumented in their own country.

This de-naturalization heightened the exclusion and persecution of Black people in Mauritania. Individuals without adequate documents cannot seek justice through the courts, cannot own property, cannot work, and cannot move freely around the country. Furthermore, police forces and other authorities frequently subject Black Mauritanians to racial profiling, often requesting proof of citizenship and resulting in those individuals who do not have documents and found stateless to be jailed, extorted, and trafficked into slavery or slavery-like conditions.

“Black Mauritanians aren’t leaving their homes, families, and lives to go on an adventure. They are fleeing to survive, running from a country where Black people are oppressed, enslaved, denied citizenship, attacked, and killed simply for being Black.”

- Houleye Thiam, President of the Mauritanian Network for Human Rights in the U.S.

State Violence and Dangers for Individuals who are Deported

Mauritania is clearly unsafe for Black Mauritanians, especially those rendered stateless, to return. Individuals who are deported often face immediate violence and capricious jailing upon returning to their country of origin, since authorities can exploit their lack of rights. Human rights organizations have documented instances of severe physical violence, gender-based violence, and torture at the hands of jailers. Some reports indicate these tactics are employed as a punishment for having sought asylum in the United States.

The deadly levels of state violence are not reserved only for individuals who are deported. People who protest Mauritania’s racist caste system and continued use of slavery are frequently arrested and even sentenced to death: in 2018, the government violently attacked protestors calling for the release of political prisoner Biram Dah Abeid; forced an internet blackout and arrested opposition leaders after the 2019 presidential election; and frequently beat people protesting land grabbing or other abuses.

There is clear precedent for the Biden Administration to protect Black Mauritanians immediately, beginning with TPS. The State Department has advised U.S. citizens to refrain from visiting Mauritania in its latest travel warning, and in 2018, the Trump Administration terminated special trade benefits for Mauritania specifically because of its lack of progress in ending slavery.

Non-refoulement prohibits the U.S. from returning an individual to any territory—particularly their country of origin—where their life or freedom is at risk. It is also a core principle of international law that the U.S. codified in the Refugee Act of 1980. In light of the ethnic and racial persecution they face, Black Mauritanians fleeing violence and statelessness should not be returned to Mauritania under any circumstance, nor should they be pushed back to unsafe territories along their way to the U.S. Unfortunately, the discriminatory treatment that Black immigrants face in the U.S., as well as harsh and inhumane deterrence policies, have denied Black Mauritanians asylum and have led to their deportations.

The Biden Administration should affirmatively protect Black Mauritanians from further harm by designating TPS or DED for the country. In addition, the Administration must halt further deportations of Black Mauritanians immediately, and expand affirmative relief such as humanitarian parole, refugee admissions for the continent of Africa, and access to the asylum system in the U.S. Doing so is not only in line with international and U.S. law, but it will enrich American communities, while demonstrating humane leadership on the world stage.

The Data is Clear: Bail Reform and Community Investments Will Keep New…