A family separated at the border fighting to stay together

“Their story illuminates the fact that rolling back Trump-era policies is not enough.”

Jose and his family, who were targeted because of their church affiliation among other reasons, moved from town to town persevering through police and gang violence in El Salvador. This family was separated at the U.S.-Mexico border because in January 2019, the Trump Administration implemented the Migration Protection Protocols (MPP), known as the “Remain in Mexico” policy. Their story illuminates the fact that rolling back Trump-era policies is not enough. The Biden Administration must go further because families like Jose’s remain unprotected and continue to endure consequences from the dozens of Trump Administration policies that made systematic cuts to the asylum program. Our immigration system must be transformed to reconcile these fatal shortcomings in order to value, protect, and dignify families and people.

The Trump Administration’s Remain in Mexico policy forced U.S. asylum seekers, like Jose’s children, to remain stranded in Mexico as they awaited their U.S. asylum hearing in court. For more than two years, thousands of children like Jose’s and other asylum seekers waited in Mexico and thousands of others have been expelled or barred from accessing legal asylum, which is their legal right. The current increase in people attempting to cross the border and specifically that of unaccompanied children actually began under the Trump Administration in April 2020 while MPP was still in effect–evidence that cruelty isn’t an effective deterrent when families are fighting to keep their family together and safe.

As of March 2021, the Biden Administration has initiated plans to roll back MPP, including the start of processing people into the U.S. who are trapped along the border. President Biden has also invested to stabilize the Northern Triangle countries, and deployed the Federal Emergency Management Agency (FEMA) along the border. These crucial steps in the right direction must be taken further to dismantle cuts made to the asylum system that still harm families like Jose’s– he has been waiting for over two years for an asylum hearing and for work authorization because of intentional delays of asylum processing which were instituted under the Trump Administration.

The impact of the Trump Administration’s Remain in Mexico policy

seeking asylum have been forced to remain in Mexico while they await their U.S. court hearings under the Trump Administration’s “Remain in Mexico” policy.

under 18 have been sent back to Mexico for the duration of their U.S. immigration proceedings under the Trump Administration’s “Remain in Mexico” policy.

under the age of five have been forced to live in dangerous, traumatizing conditions along the border under the Trump Administration’s “Remain in Mexico” policy.

less than 12 months old have been held at the border under the Trump Administration’s through the “Remain in Mexico” policy.

“The story would repeat itself: they’d move, be recognized, face harassment and targeted attacks, and then abandon their living situation in order to protect their family above all else.”

Jose, his wife and their four children were all active in their church in El Salvador; Jose was the Director of Youth Outreach. In part because of the family’s religious activity in the church, gangs, and police targeted them.

From 2016 through 2019, the family moved from town to town in El Salvador to survive the threats and violence while trying to remain in their home country. The story would repeat itself: they’d move, be recognized, face harassment and targeted attacks, and then abandon their living situation in order to protect their family above all else.

Jose and his wife saved up enough money for him and their eldest daughter to travel to the U.S. first. 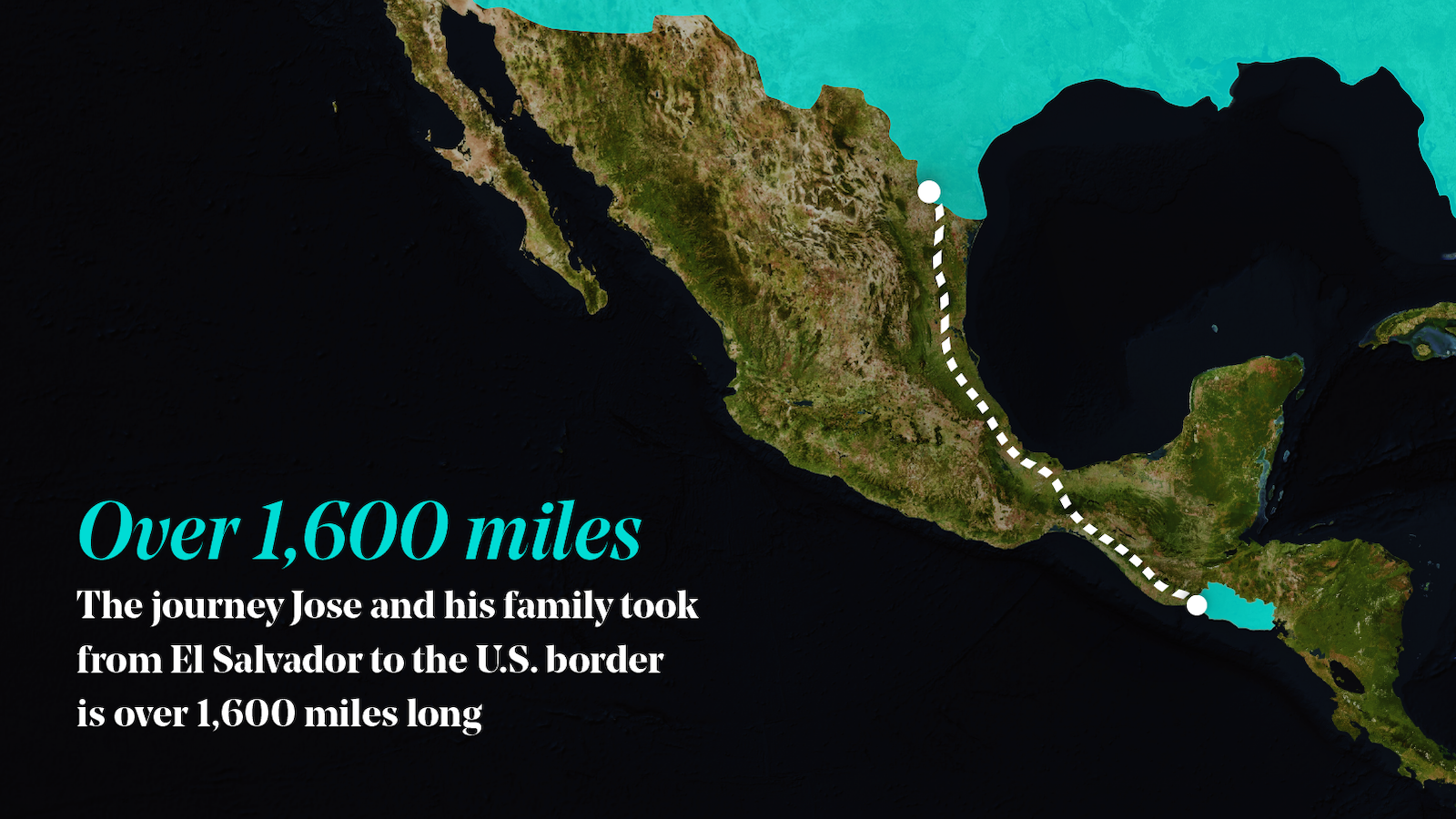 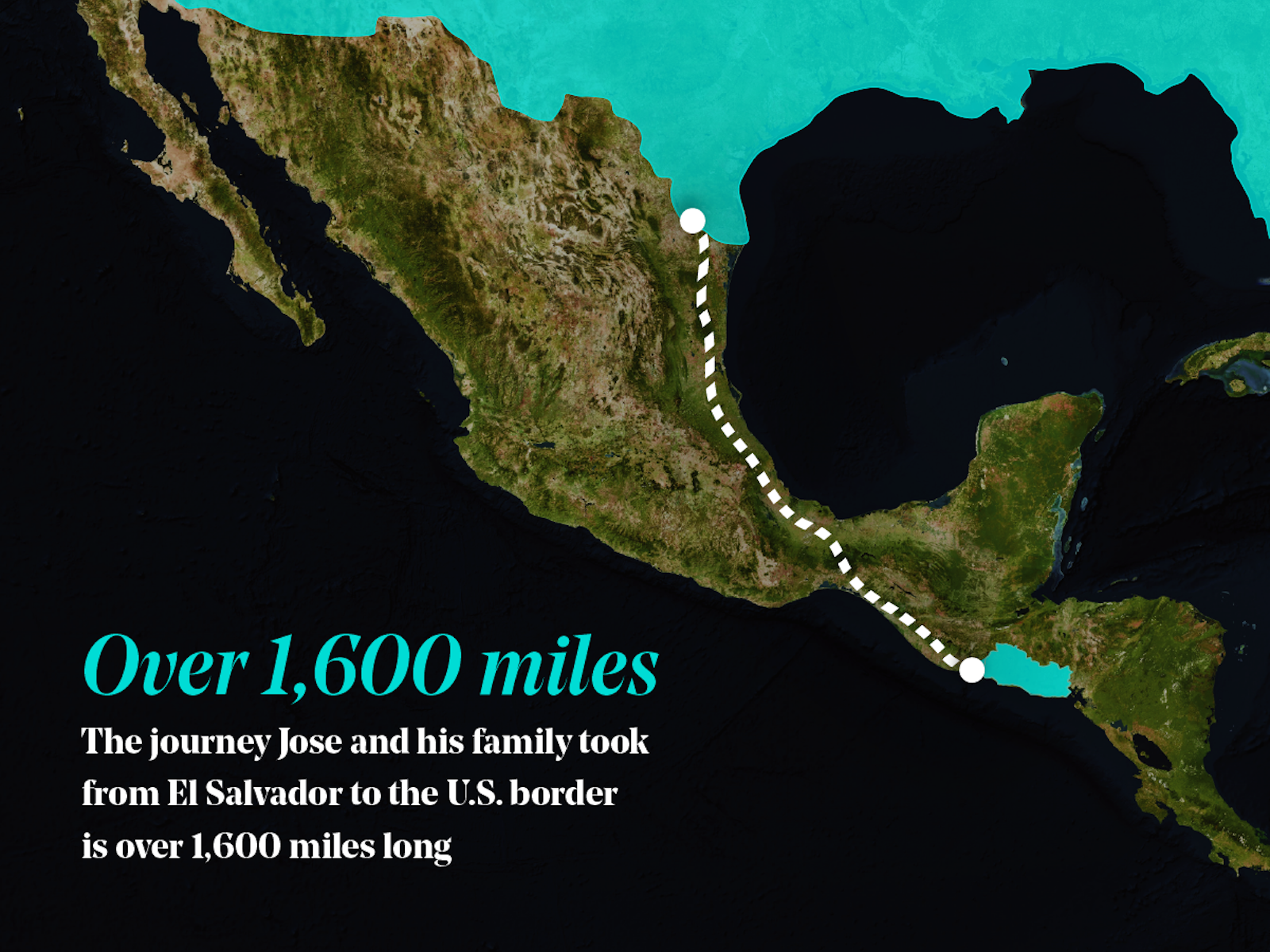 In June 2019, Jose and his daughter arrived in Laredo, Texas before MPP had come into effect. They presented at the port of entry to claim their legal right to asylum as a part of the process; they were detained, processed by U.S. immigration authorities, and released into the U.S.

In September, just months later, the mother and three of their children traveled to the U.S. border. By this time in Southern Texas, the Trump Administration’s Remain in Mexico policy had taken effect. This meant that after the mother and children were processed, instead of being released into the U.S., they were forced to await their asylum hearing in a filthy, overcrowded tent camp in Matamoros, Mexico. This is when Jose’s family was separated at the border because of the Remain in Mexico policy. Before the Remain in Mexico policy, the family would have been able to reunite with Jose and the daughter in the U.S. to claim their legal right to asylum.

As a result of family separation at the border due to the Remain in Mexico policy, the mother and three children were stranded along the border for months. There, the 9-year-old son was assaulted and they all witnessed frequent violence, attempted kidnappings, extortion and a dead body floating down the Rio Grande. 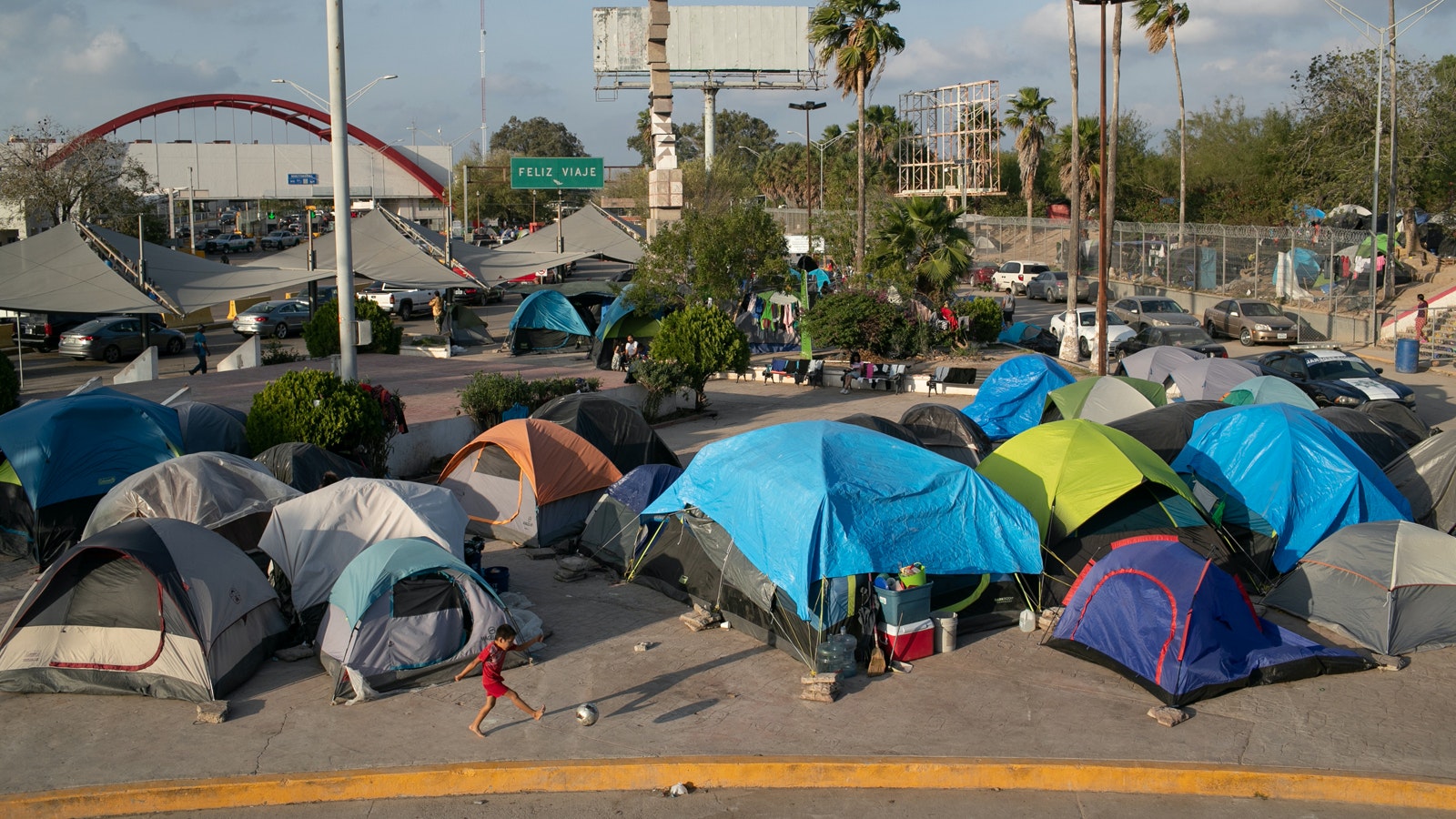 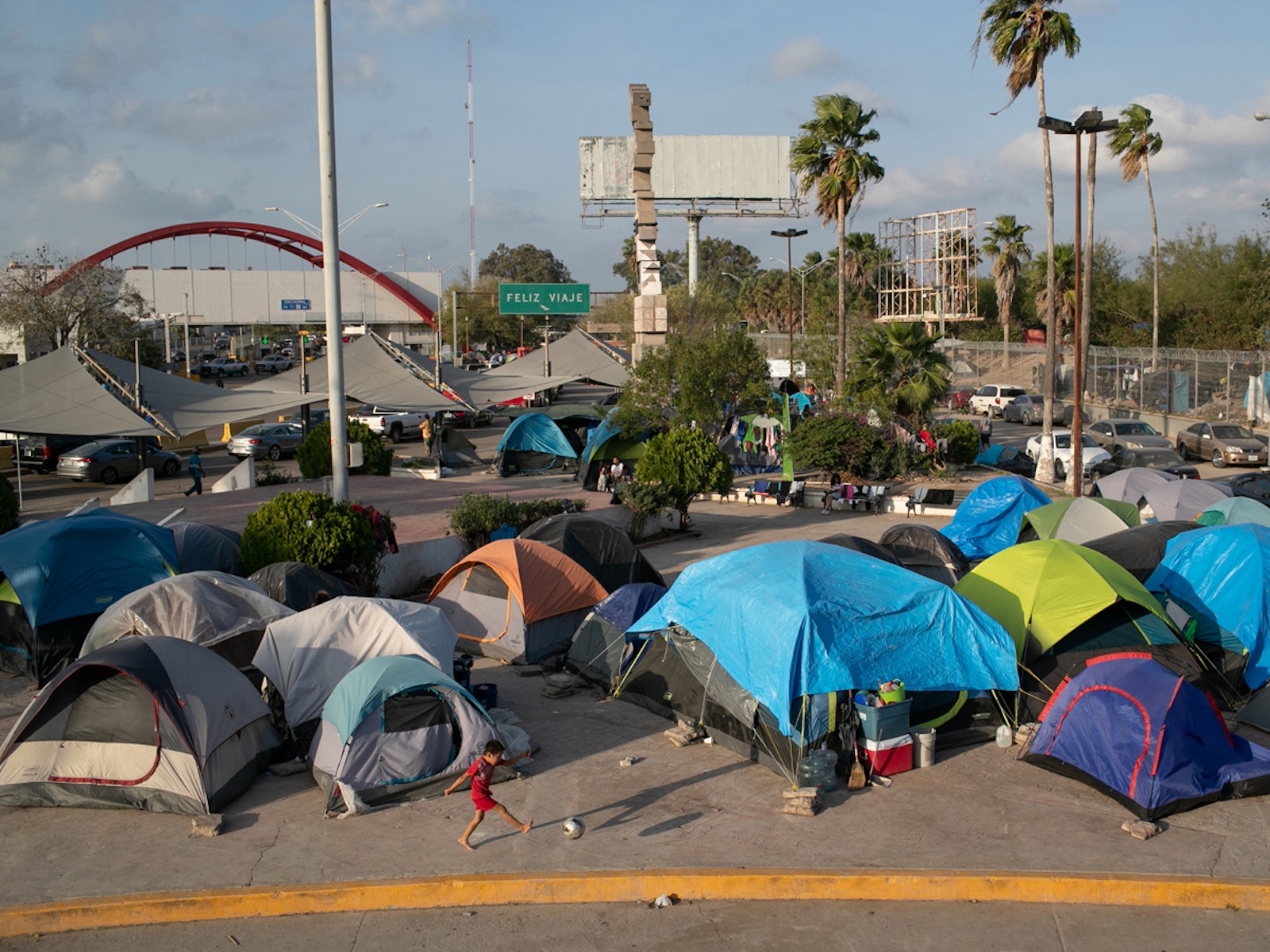 “Even though Jose filled out the necessary paperwork within days to have the children released to him, ORR blocked the request because of the case’s MPP designation.”

On December 16, the family attempted to reunite with Jose and the eldest daughter once again when they attended their first court hearing in Brownsville, Texas. But after two hearings and through an overwhelmed court system with no mechanism to reunite families, a judge ordered their removal– forcing the family to remain separated at the border once again.

Jose’s wife and three children returned to the camp in Matamoros, Mexico, still separated from Jose and the eldest daughter. Forced again to live in filth and fear, the mother understood their family had no chance of reuniting under MPP. Faced with no other options for safety, and recognizing that her children were under constant threat in Matamoros, she decided to send her children alone to the border to present themselves and to try to seek refuge.

By January 18, 2020, the children experienced another instance of family separation after trying to present themselves again at the border to claim their legal right to asylum as children. They were transferred to an Office of Refugee Resettlement (ORR) shelter located within 50 miles of Jose and the eldest daughter in the U.S. Even though Jose filled out the necessary paperwork within days to have the children released to him, ORR blocked the request because of the case’s MPP designation.

Jose’s three children were separated from their parents when they were taken into an Office of Refugee Resettlement shelter.

After the Department of Homeland Security (DHS) scheduled a deportation date for the children because of their MPP designation, their legal counsel mounted a case and fought for them to be released to Jose and able to seek asylum. Multiple court filings later, the children were finally released from ORR custody on March 25, 2020 and reunited with their father. However, the three children remain under threat of deportation and being removed to El Salvador where they have no parent to receive them.

Because of restrictions on work authorization for asylum seekers under the Trump Administration, Jose has not been able to receive authorization, even though he has been eligible since December 2020.

The only way for Jose and his children to be protected is for him to win his asylum case. However, a hearing has not been scheduled. When Jose and his eldest daughter were initially processed at the border by ICE, their case was put on a slow track with huge backlogs because they were not determined to be flight risks, and therefore were not detained pending the conclusion of their immigration cases.

The entire family faces trauma and legal battles in the aftermath of MPP and family separation at the border.

The Biden Administration has started a necessary rollback of MPP, but the administration must go further to address the people and families in the United States who still face residual trauma and insurmountable legal barriers in the asylum system. We must transform our immigration system to recognize and fix these fatal pitfalls in the asylum system, and dignify families like Jose’s.

After years of moving from town to town in El Salvador to persevere through gang and police violence, Jose’s family saves enough money for him and his eldest daughter to separate from their family and go first to seek asylum in the U.S.

By the time Jose’s wife and three other children arrive at the U.S. border a few months later, MPP has taken effect. Instead of being released into the U.S. after processing, they are not able to reunite with Jose and the eldest daughter in the U.S. and forced to live in a dangerous tent camp in Matamoros, Mexico. There, they experience and witness frequent violence, extortion, and a dead body floating down the Rio Grande.

The mother and children attempt to reunite with their family through their asylum court hearing in Brownsville, Texas. But after two hearings, and through a sham court system with no mechanism to reunite families, a judge denies their asylum claim and orders their removal.

The mother and children are stranded once again in danger along the border; the mother sees no chance of their family reuniting under MPP. Left with no other options for her children’s safety, she makes the heart-wrenching decision to send them alone, without her, to the border to present themselves and seek refuge.

The children are processed and transferred to an Office of Refugee Resettlement (ORR) shelter in the U.S. where they face further separation from their family. Jose’s legal request to have the children released to him is blocked because of the children’s case’s MPP designation. DHS sets a court date for the children’s deportation.

Only after the children’s legal counsel mounted a lawsuit to reunite the family are the children released from ORR on March 25, 2020 and reunited with their father. To this day, none of them have protection from deportation.